Hello Everyone!
I have made a book video for Reckless Bounty! Enjoy!

Posted by Marly Mathews at 9:03 AM No comments: 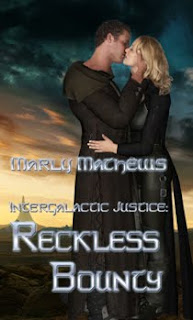 Reckless Bounty has been released at New Concepts Publishing!!! Reckless Bounty is the first book in my Intergalactic Justice Series. This is a futuristic paranormal series revolving around the heroine's adventures as a bounty hunter and as a woman with several psychic abilities.
Here is the blurb for Reckless Bounty:
Samantha Cassidy has her own unique sense of justice as an intergalactic bounty hunter. She's a psychic in denial with powers that sometimes have a way of emerging without her permission.


When she learns that her estranged husband is about to hang for a crime she is convinced he didn't commit she races to save him before it's too late.